An economic slowdown is approaching, but that’s no cause for investor alarm

OpinionsAn economic slowdown is approaching, but that's no cause for investor alarm

We’re approaching the end of the economic cycle, but markets are not stupid. Investors waiting for a significant collapse in the equity market because the economy is slowing may be in for a long wait, argues Rory Bateman, Head of UK & European Equities at Schroders.

Equity markets are typically quite effective at anticipating the ups and downs of the underlying economy; violent market swings are caused by unexpected moves in activity often brought about by bad policy decisions or unidentified bubbles in the system.

Investors shouldn’t be alarmed that the cycle is maturing. It’s nearly ten years since the financial crisis and global growth has been resilient for a number of years. The natural course of events is to expect a slowdown because economies can’t grow in perpetuity.

Our belief is that the next slowdown will be shallow in amplitude, which is typical following a severe recession like we saw in 2009.

We think the European situation is somewhat different to the US given the eurozone was later going into recession and, following the eurozone crisis, was much later to emerge from that recession. European equities have not recovered to the same extent and valuations continue to look attractive.

The “super tanker” European economy should continue on a low growth trajectory for the coming year or two but we acknowledge the global backdrop looks more challenging.

Earlier this year we talked about intra-market correlations coming down, paving the way for superior stock selection to be the key differentiator. We continue to believe outstanding bottom-up stock selection will be crucial for alpha generation (i.e. returns superior to the market) in the second half of 2018.

It’s been a challenging year so far for global equities in 2018 with negative returns in most markets. The exception is the US, where the S&P 500 has delivered a small 2.7% (in US dollars) gain driven by the strong earnings story for US corporates. Europe has been impacted once again by internal eurozone issues as Italy has failed to form a credible new government.

Chart 1 below shows that the current US economic cycle is already fairly extended compared to history so it shouldn’t be a surprise to investors that economic activity is likely to slow.

Chart 2 shows that the global economic activity indicator has already turned and G7 industrial production has been at elevated levels for some time. 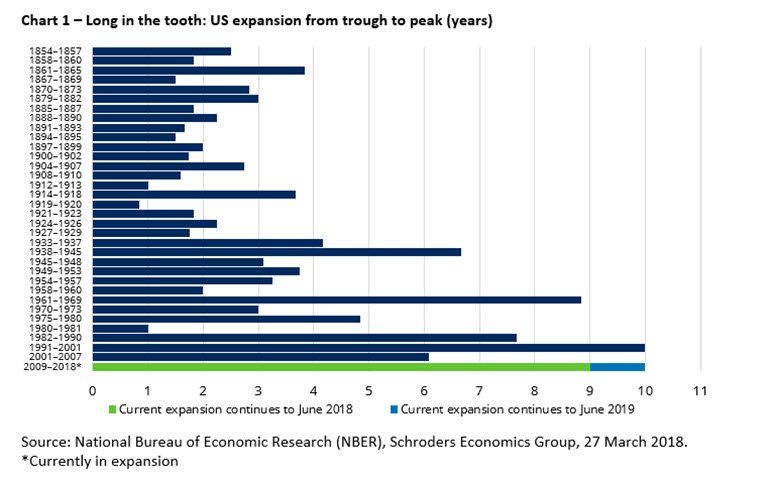 The overwhelming theme across all markets, however, has been the tightening of monetary policy. In the US the Federal Reserve (Fed) has been raising interest rates and many investors are concerned about the squeeze that higher rates will have on economic activity.

In Europe, quantitative easing (QE) is coming to an end in an environment where growth remains at a low trajectory. Central banks have significantly expanded their balance sheets through QE over the last ten years, which has probably prevented an extended deflationary cycle.

However, as chart 3 shows, QE becomes QT (quantitative tightening) in most of the major economies in 2018 and 2019 which is likely to be a headwind for growth as liquidity is tightened.

Politics brings uncertainty, as ever

At the time of writing the Italians are battling with the EU over immigration. This is creating political noise as usual, but we suspect there will be an agreement and the upset to markets will be minimal.

Indeed the situation in Italy is not dissimilar to Germany where Chancellor Angela Merkel has recently avoided the disintegration of her fragile coalition by striking a migration deal with her hostile CSU partners on the formation of transit centres for asylum seekers on the Austrian border.

Meanwhile, the UK has taken another step towards exiting the EU with the government agreeing a proposal for the future UK/EU relationship. The ink was barely dry before some leading pro-Brexit ministers tendered their resignations but so far there has been no challenge to Prime Minister Theresa May’s leadership.

The full white paper detailing the proposal has not yet been published but the information available suggests the government is moving closer to a “soft Brexit”. The proposal still needs to be negotiated with Brussels and there is scope for positions to change as that negotiation takes place.

The UK equity market reaction to these latest developments has been minimal, perhaps because many were already expecting a “softer” Brexit. Looking longer term though, Brexit voters’ ongoing support for the Conservative Party may waver should they be dissatisfied with the type of Brexit that is delivered.

However, the most obvious challenge to equities globally is the ongoing deterioration in trade relations, with US President Trump imposing tariffs on a range of industries and the inevitable reaction from the Chinese and to a lesser extent from Europe.

Given these “tit-for-tat” negotiations are still evolving, it’s very difficult to interpret the impact on trade overall. But sentiment will be impacted if agreements can’t be found soon.

There will always be positive or negative surprises for equities, which by definition are unpredictable, but a slowing economy doesn’t necessarily mean weaker markets. Markets are quick to price in slower economic growth and we believe the fundamentals are currently being reflected in global valuations.

Having said that, eurozone valuations relative to other markets continue to look attractive in our view. Valuations are critical for our understanding of likely future returns and, as chart 4 below shows, the eurozone on a cyclically adjusted price-to-earnings ratio looks favourable at 18.2x versus the long run average of 19.9x. 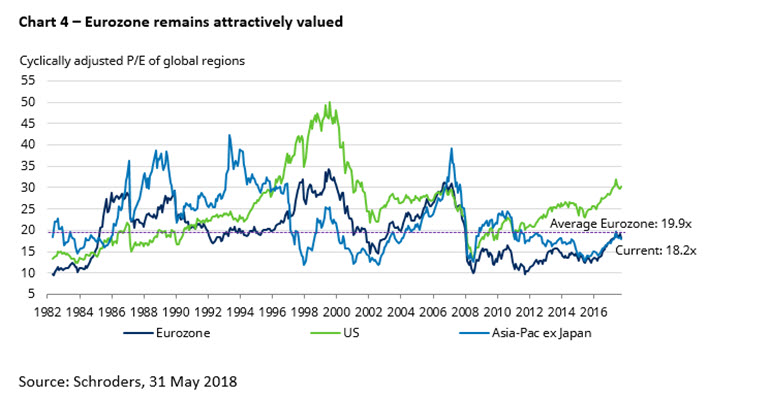 As we enter a period of slower growth, identifying the most attractive companies becomes even more important for investors seeking to harness returns ahead of the market. Generating alpha – rather than relying on broad, correlated market earnings growth – can make all the difference in the dispersion of returns.

Our expertise in picking undervalued companies through bottom-up fundamental analysis should give investors confidence in our ability to generate superior returns. As we have outlined above, there are numerous cross-currents influencing equity markets and working out what is already priced in is the key to stockpicking success. Our experienced team of sector analysts help us as fund managers to unearth the opportunities that others may miss.

In the context of a potential slowdown of the economic backdrop, it is crucial to identify those companies taking steps to improve their own performance, rather than simply relying on the rising tide of increased economic activity.