How different assets perform in an economic slowdown

It appears that the US is entering the slowdown phase of the economic cycle, argues Martin Arnold, Economist at Schroders. But what might that mean for returns across asset classes? And can a recession be avoided?

For the first time in two years the Schroders US output gap model is signalling a change in the US business cycle. It suggests the economy is moving from “expansion” to “slowdown” (the other two stages in the cycle being “recession” and “recovery”).

The last slowdown period occurred during the Global Financial Crisis and so this should be seen as a warning sign to US policymakers that a recession could be on the horizon.

Is a recession in the offing?

The Schroders output gap model is a way to estimate the difference between the actual and potential output of the economy (GDP). It uses unemployment and capacity utilisation as variables.

Since the model was launched in 1978, there have been six separate instances when it has indicated the US economy was in slowdown mode. Of these six phases, four have been followed by a recession. The two periods of slowdown that did not result in recession and reverted to expansion, occurred in early 1990 (when the slowdown was a false signal) and in the final months of 1998 (when it was a slowdown in the middle – not the end – of the cycle).

In our view, US growth has been supported by accommodative central bank policy and we expect that slowing US growth will force the Federal Reserve’s (Fed) hand in cutting rates in 2020 to bolster activity. Although we feel that the slowdown phase will be prolonged and not end in recession, the balance of our scenario risks indicates that recession is a possibility, especially if policymakers don’t respond to the threat.

Recession prospects aside, the slowdown phase of the economic cycle has historically had considerable implications for the performance of various asset classes. Of course, past performance is no guide to what will happen in the future and may not be repeated.

The table below shows the average performance of US equities, government bonds, high yield (HY), investment grade bonds (IG) and commodities, over the various stages of the cycle, since February 1978. 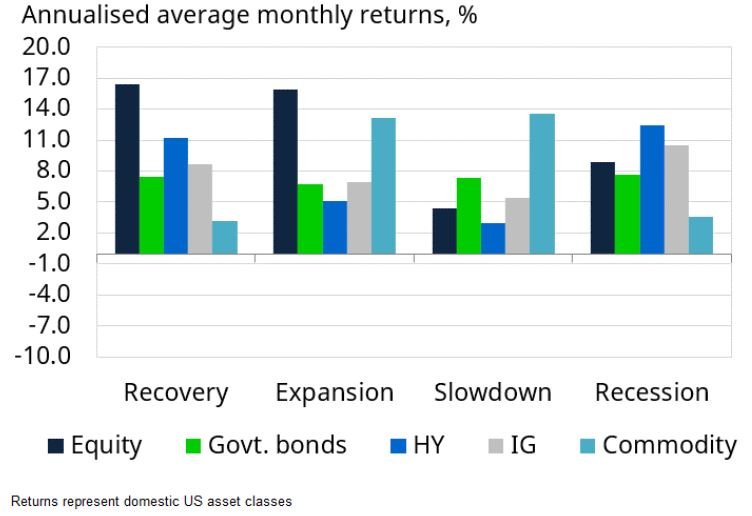 During a slowdown phase in the output gap model, equity markets not only perform the worst compared to other phases of the business cycle but exhibit greater volatility. During the slowdown phase, US equities have returned on average less than 5% on an annual basis, with volatility of more than 15%.

Periods of slowdown are historically the only phase when sovereign bonds outperform equities.

This time could be different

The current slowdown phase could be different. The recovery from the Global Financial Crisis was the longest and shallowest in history. With monetary policy remaining accommodative, there is the potential for the Fed to engineer a slowdown phase that is longer than average and which doesn’t end in recession – a period of so called “secular stagnation”.

On the surface, such a period of weak growth appears bad. But arguably, if it doesn’t end in a recession, central bank policy may have finally delivered on an objective it has been trying to achieve for decades: smoothing growth and avoiding the boom and bust cycle of the economy. Indeed, the Fed states that monetary policy works “by spurring or restraining growth of overall demand for goods and services”. In this way, it can “stabilise the economy” and “guide economic activity…to more sustainable levels”.

Time will tell and investors will likely keep their fingers crossed.