How rising interest rates have affected returns from bonds

Rising interest rates and tighter monetary policies are firmly on the agenda globally.

The US Federal Reserve in particular has been paving the path for hiking interest rates and many investors expect at least three further rate hikes this year.

In the UK, the Bank of England raised its interest rates for the first time in a decade back in November. In other parts of the world, the European Central Bank and Bank of Japan have begun gradually withdrawing from their respective quantitative easing (QE) programmes.

Many are therefore expecting government bond yields to rise and due to the inverse relationship between yields and prices (as yields increase, prices fall), investors have become nervous about fixed income investments, including credit assets. But these fears may be overblown.

In September last year, we looked into past episodes of rising rates in the period between 1970 and early 2017 and how returns were affected. We focused on the US and emerging markets, measuring returns for bonds priced in dollars and in local currencies.

Our research suggested rising rates do not necessarily spell doom for income assets, including credit. The main findings were: 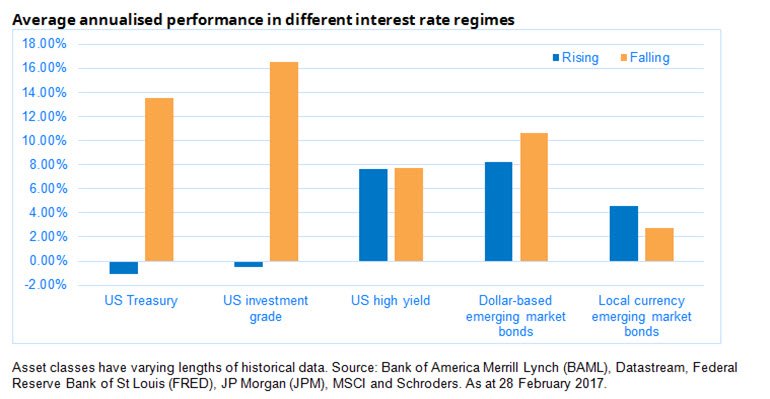 These conclusions should provide comfort for credit investors. As interest rates tends to rise in anticipation of stronger economic growth, assets which are more sensitive to economic growth (such as high yield debt) can still perform well. As corporate fundamentals usually also improve, this provides a boost to company profits and improves the creditworthiness of borrowers, supporting their corporate bonds.

The variation in performance of these assets, combined with the fact that most returns have been positive during rising yield environments, underlines the importance of asset allocation during times of rising rates. If investors can combine savvy asset allocation with an awareness of credit assets’ behaviour when rates rise, then they may be able to add value even when the going looks tough and the temptation might otherwise be to sell.

Investors should also remind themselves about the purpose of holding credit as part of their portfolio. If it is solely for returns, then shrewd asset allocation is needed when rates are rising.

If it is to generate a level of income, which has been the case over the last few years, due to low interest rates, then investors need not necessarily panic as the impact of rising interest rates on income levels has been minimal.

Companies are loath to cut dividends, given the negative signal that it sends to the market, while coupons on bonds are one of the first claims on a company’s income, ranking above other demands. 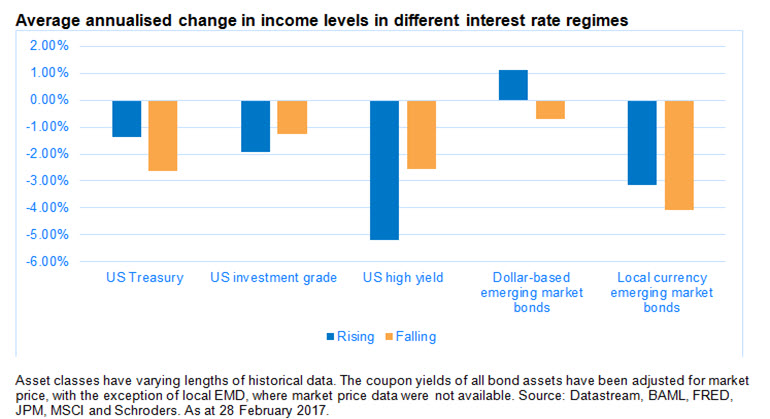 In all this it is important to remember that, like any other asset class, investing in bonds requires an adequate time horizon. Being patient and not panicking when interest rates go up is integral to this strategy.

The value of investments and the income from them may go down as well as up and investors may not get back the amounts originally invested.