Is the road to inflation taking us back to the 1960s?

OpinionsIs the road to inflation taking us back to the 1960s?

The 1960s are remembered for radical social reform, political upheaval and war. Often forgotten is that they were also a time of rising inflation – and in this they may hold disquieting lessons for us today.

One of our key calls for 2018 is that consumer price inflation in the US will become an increasing issue for markets. In a turnaround from 2017, when unexpectedly benign inflation helped create a Goldilocks environment for risk assets (not too hot and not too cold), this year we expect prices to surprise on the upside.

Our conviction has been reinforced by recent rises in the oil price. But we also expect “core” inflation, which excludes food and energy, to increase as pressures late in the economic cycle force up labour costs and allow capacity-constrained firms to increase prices more rapidly. Although historical comparisons are never perfect, there are worrying parallels here with the 1960s, when inflation picked up sharply in the second half of the decade.

As in the 1960s, initially low inflation last year puzzled many as it came against a backdrop of a tight labour market, leading to much debate amongst economists about whether the traditional link between unemployment and inflation had broken. It had been clear for some time that wages were not picking up in response to low unemployment and last year’s experience led some to herald the death of the Phillips curve, which says the two should be correlated.

In our view this apparent disconnection reflected a mix of structural factors, such as globalisation and the increasing impact of technology, along with problems in accurately measuring the amount of slack in the labour market.

For example, on the question of measurement, we recently drew attention to the sharp drop in participation rates in the US which began to reverse as more people came back into the labour force. This meant that the low unemployment rate did not capture the availability of labour. Such analysis still holds, but there are limits to how far the US can keep pulling people back into the labour force, a view supported by surveys which show skill shortages becoming ever more acute (chart 1). 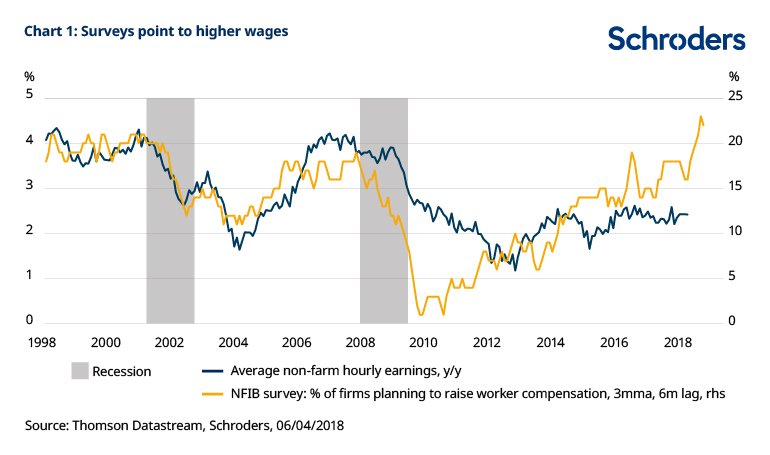 The comparison with the 1960s seems particularly relevant as it was also a period when inflation appeared to be unresponsive to developments in the economy before taking off sharply.  Unemployment fell steadily in the first half of the decade, from 7% to 3.5% by 1968, with little impact on wages or prices. However, in a warning for today, this changed after 1965, when prices picked up significantly and core inflation accelerated 6% towards the end of the decade (chart 2).

One of the triggers for that shift was fiscal expansion as the US pursued the war in Vietnam and domestic expenditure rose to fund the Great Society programme, a set of unprecedented initiatives launched by President Lyndon Johnson to alleviate poverty and racial discrimination. The extra stimulus pushed unemployment down even further, creating a tipping point where wages and prices began to take off.

We are not seeing the same scale of stimulus today, but we do have the same combination of a significant fiscal expansion meeting a late cycle economy. Following the recent Tax Cuts and Jobs Act and the Bipartisan Budget Act, US government borrowing is headed for 5% of GDP by 2019. This expansion in fiscal policy is set to keep demand rising in the US as the economy faces ever tighter constraints on supply (chart 3). 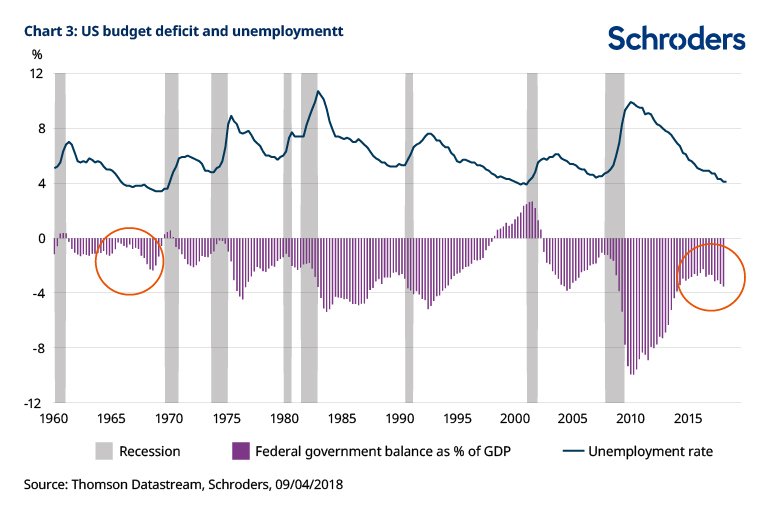 Two other factors played a part in the 1960s inflation. First, there was a material pick-up in healthcare inflation due to the introduction of the Medicare and Medicaid schemes, which aimed at bringing medical insurance to the poor, elderly and disabled. The rise in prices was broad-based across the economy, but these new programmes contributed significantly by raising demand for healthcare (particularly doctors’ services), with the result that medical care inflation tripled from 3% to 9% between 1965 and 1967. In recent times, healthcare inflation has slowed as a result of cuts in Medicare payments and has been an important factor in holding back the general rise in prices. The risk today would seem to be less than fifty years ago, unless there were renewed efforts to repeal President Barack Obama’s Affordable Care Act.

Second, in the late sixties, the Federal Reserve (Fed) did not tighten monetary policy rapidly enough to prevent inflation from rising and fuelling expectations of further increases, which in turn fed into a wage-price spiral. Some suggest that the Fed was constrained by political pressure to keep interest rates low as the budget deficit rose so as to reduce the cost of financing the war. Whilst geopolitical tensions have been rising between the US and Russia and with China (over North Korea and trade), this time around there has been no attempt to pressure the Fed to keep rates low for patriotic reasons.

It is often with the benefit of hindsight that errors are revealed. In the late 1960s there was a belief that the unemployment rate could continue to decline when more recent estimates show that the economy was already operating above capacity. Today’s debate reflects the same uncertainty. Some reassurance can be found in the fact that Janet Yellen, who served as Chair of the Board of Governors of the Fed from 2014–2018, continued to raise rates last year, even as inflation surprised and undershot its target. It remains to be seen though whether the new chair of the Fed, Jerome Powell, can show similar resolve as political pressures to keep policy easy will only intensify as we move toward the mid-term elections and the next presidential election in 2020.