Late-cycle investing: Are investors in for a Dickens of a time?

OpinionsLate-cycle investing: Are investors in for a Dickens of a time?

It is the best of times for the US economy, but for investors in high yield bonds and stocks it could become the worst of times, argues Neil Sutherland, Portfolio Manager on the US Multi-Sector Fixed Income Team at Schroders.

“It was the best of times; it was the worst of times…” Charles Dickens’ famous opening sentence from his 19th century novel A Tale of Two Cities neatly encapsulates the current situation in financial markets.

The US economy is booming, unemployment is the lowest since the moon landing and Federal Reserve (Fed) Chair Jerome Powell recently citing a “remarkably positive outlook.” For the US economy, it is the best of times.

The opportunity, value and tailwinds in various fixed income assets, on the other hand, are as challenged today as they have been for a number of years. For those looking to find attractive gains from equities or high yield corporate bonds, it is the worst of times.

The peak for risk assets often occurs when economic data is strongest. US high yield corporate bond valuations, for instance, have tended to peak with US manufacturing activity (see chart, lower spread equates to higher valuation). It is well to remember that strong earnings and economic data can be better at showing where we have been than where we are going. In 2007 Lehman Brothers’ profits were $4.2 billion on revenues of $19 billion.

Since the Global Financial Crisis, financial assets have enjoyed strong returns, partly due to a low starting point, but also an unusually favourable combination of ultra-accommodative monetary policy, low inflation, low yields and zero returns on cash. Each of these is reversing.

Peak profitability – pendulum swinging back from capital to labour

Building wage inflation is another that things are shifting. Subdued inflation and wages made ultra-accommodative monetary policy possible. It also helped stock markets. Corporate profits have taken up a disproportionate amount of GDP – labour’s share of GDP is close to 60-year lows, but the pendulum may be swinging back (see chart).

Corporate and employee share of profits have diverged from historic norms 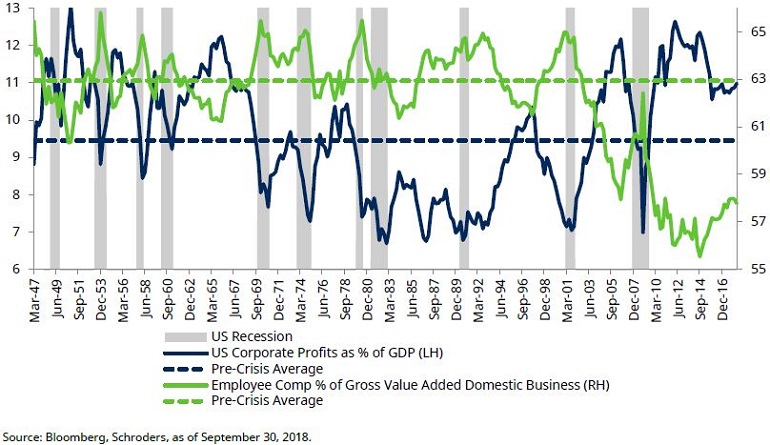 The Atlanta Fed median wage growth tracker is approaching its highest level since the financial crisis, with capacity constraints observable across various industries. Skilled truck drivers can currently command salaries of $100,000 amid an estimated shortage in drivers of 50,000. Amazon recently raised its minimum wage to $15.

A sub-5% US unemployment rate has tended to precede deteriorating returns on the S&P 500. We could start to see rising wages squeeze company margins and earnings.

When will the economic cycle end?

We don’t know, nor does the Fed, who recently admitted as much. Predicting this has proved beyond the powers of most economists; the Fed chair at the time did not spot either of the last two recessions coming.

Inverting yield curves (longer-dated bond yields falling below shorter-dated) and a trough in the unemployment rate are the most reliable indicators, according to the St Louis Federal Reserve, leading a recession by nine and 10 months respectively on average. Today, US unemployment is at a near 50-year low and the difference between two and 10-year US Treasury yields is almost zero.

The current economic expansion is 112 months-long, the second longest since 1854 when recordkeeping began, and eight months shy of the record. It won’t die of old age, but it seems reasonable to ask just how long it can last.

Structural problems persist. Notably excessive debt, arguably the main cause of the 2008 financial crisis. Ten years on, global debt is $237 trillion, up from $166 trillion (see chart). Chinese debt is 460% higher. The investment grade corporate bond market has more than doubled in size while credit quality has fallen.

US pro-cyclical fiscal policy has brought the feel-good factor, but the federal deficit is up 17% over the last year. A rising deficit and falling unemployment in tandem is unusual. The last time the deficit was at these levels, unemployment was 7.5%, yet the market seems unconcerned.

Its is no coincidence that debt-heavy beneficiaries of central bank largesse, corporate bonds and emerging markets, have become more volatile. Additionally, the market will likely have to absorb higher volumes of US Treasuries.

Increasing volatility and a shifting regime will tend to result in different opportunities emerging. In the US, municipal bonds, short maturity bonds and securitised debt are starting to look attractive. In a broad sense, there now seems much more scope for achieving reasonable returns from a low-risk investment grade portfolio.