The theme of disruption is having a profound effect on how we live and how we invest, explain Matthew Dobbs, Fund Manager, Asian Equities & Head of Global Small Cap, and Kristjan Mee, Strategist, Research and Analytics, both Schroders. There are three factors which we think mean small caps are potentially the best way to tap into the theme.

Smaller companies (small caps) offer the potential for higher returns compared with investing in larger companies, although not without risks. The returns from individual stocks vary a lot and the market is relatively inefficient. This gives active investors greater opportunity to add value.

In addition, investors are increasingly being drawn to the small cap sector due to its ability to profit from the ever-growing theme of disruption.

Figure 1: Long-term small-cap performance has been impressive but cyclical

Past performance is not a guide to future performance and may not be repeated.
Source: Credit Suisse, S&P. Data prior to March 2006 is Ibbotson. Data from March 2006 is S&P LargeMidCap vs. SmallCap. Data up to April 1 2019. USD return.

Understandably, such cyclicality might cool investors’ enthusiasm for small-cap investing. However, we believe that there are structural reasons why selective exposure to global smaller companies can potentially yield better returns than a broad market exposure. This belief is based on three key factors: the fundamental attributes of small caps, the relative inefficiency of small-cap equities, and the scale of the opportunity set.

The fundamental case is based on the fact that small companies have the capacity to grow disproportionately from a relatively low revenue and profits base.

Almost by definition, it is only by investing in small companies that investors can gain effective exposure to a new technology or a market.

They are often the driving force behind disruption, benefiting from this trend rather than being a victim of it. They are less burdened with layers of management and there is less fear of losing sales volume or market share by introducing new products; a major issue for well-established large corporations. Smaller companies who are key players in the fast-growing electric vehicle and artificial intelligence industries are good examples – please see the full paper below for more information and case studies.

The opportunity case is the fact that the small cap market is much larger than the large cap market. For example, there are 6,216 small cap companies in the S&P Developed Benchmark Index, compared with 1,932 large and mid cap companies, according to S&P data as at March 31 2019. Large cap investors are at risk of ignoring the vast majority of the investment universe.

Small caps also tend to be more domestically focused than large caps. This means that, even if the broader global picture is less encouraging, it can be possible to identify companies that are exposed to supportive local growth dynamics. In contrast, large caps are more likely to be buffeted by global trends.

The inefficiency case rests on the fact that the smaller a company, the less well-followed it is, and therefore the greater likelihood of pricing inefficiencies. This can result in greater opportunities for active managers to add value. Figure 2 illustrates this by showing that the number of broker forecasts declines as companies move further down the size spectrum. This relationship holds across all markets.

Figure 2: Average number of I/B/E/S* estimates per company by size

Source: I/B/E/S, Schroders. Data as at March 31 2019
*Institutional Brokers’ Estimate System – A system that compiles estimates made by analysts on future earnings of publicly traded companies.

The consequence of these inefficiencies is greater opportunity for active small cap managers to outperform. Figure 3 shows the five-year annualized gross and net of fees excess returns of global, US and European active small and large cap funds.

In all regions, the median gross excess return for small caps has been positive, indicating that small cap managers on average do add value. Furthermore, in all regions, small cap funds have performed better than large cap funds.

However, after adjusting for fees, the median net excess returns are negative for global and US small cap funds. Because the cost of small cap funds is generally higher, the excess return must be large enough to cover that cost. Consequently, the fundamental advantages of small-cap stocks and manager skill are two necessary but not sufficient conditions for delivering positive excess returns after fees.

The good news for investors is that the top quartile of small-cap funds have been able to consistently outperform their benchmarks in all regions. This highlights the importance of manager selection to benefit from the inefficiencies in small caps. 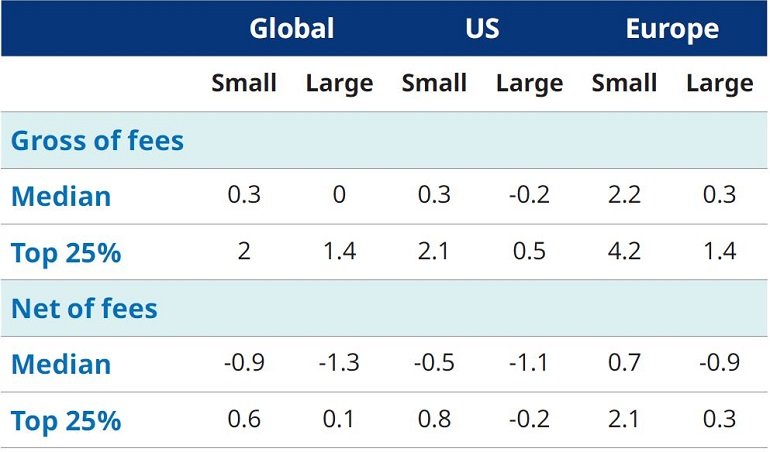 Past performance is not a guide to future performance and may not be repeated.
Source: Schroders, Morningstar. Data as at March 31 2019.

You can dowload and read the full paper in the link here.