China is at the forefront of a technological revolution and the quantity of data it will yield is unprecedented. For investors in companies based in the country’s global cities, this could bring compelling opportunities.

Here on the Global Cities blog, we recently discussed the rise of “meta cities”. These are essentially numerous global cities which combine together to form a single economic area, or “meta city”.

We explained how rapid urbanisation in three Chinese economic hubs, interlinked by transport infrastructure, is concentrating economic activity in China into such areas.

Our view is that the knowledge economy (which relies more on intellectual capital rather than physical inputs) is focused on fewer, more important, global cities. Demand for land increases as economic activity strengthens, which means that owners of real assets have pricing power. This is even more evident in China than other parts of the world, as we saw on a recent visit to two meta-city regions – Beijing (Jing Jin Ji) and Shanghai (Yangtse River Delta).

On this trip we witnessed how the early adoption of 4G – through the provision of network infrastructure of so-called macro towers and small cells – was the catalyst for the increase in data generated in China. We explain how and why 4G has facilitated mobile commerce (also known as m-commerce) in China.

Our view is that Chinese cities are now best-placed globally to transfer to fifth generation (5G) cellular technology, which will enable much faster transmission of vast quantities of data over short distances1. This will be transformational: 5G will allow people living in Chinese cities to control their lives from their mobile device.

The 5G rollout will likely require significant investment in a dense network of miniature cell phone towers (small cells)2. This upgrade is important for two reasons. First, small cells function over short distances, making them most practical in highly populated cities. This adds further to our argument that the data-hungry knowledge economy will only thrive in certain cities, fuelling their economic growth and strength.

Second, 5G will enable new technologies such as the “Internet of Things” (ie the network of every physical thing connected to the internet, particularly those that communicate with each other) practical for the first time, leading to a second boom in data creation.

The opportunity for Global Cities investors is clear; companies that own or operate data centres and network infrastructure (macro towers, small cells, fibre) will see increasingly strong demand and will make their cities more productive.

Why mobile, why China?

Simply put, consumption through handheld devices is higher in China than anywhere else in the world. There is a reason for this. Historically, all forms of commerce were operated and controlled by the state. A lack of customer focus from retailers and from banks meant that when alternatives were introduced, the market was receptive. 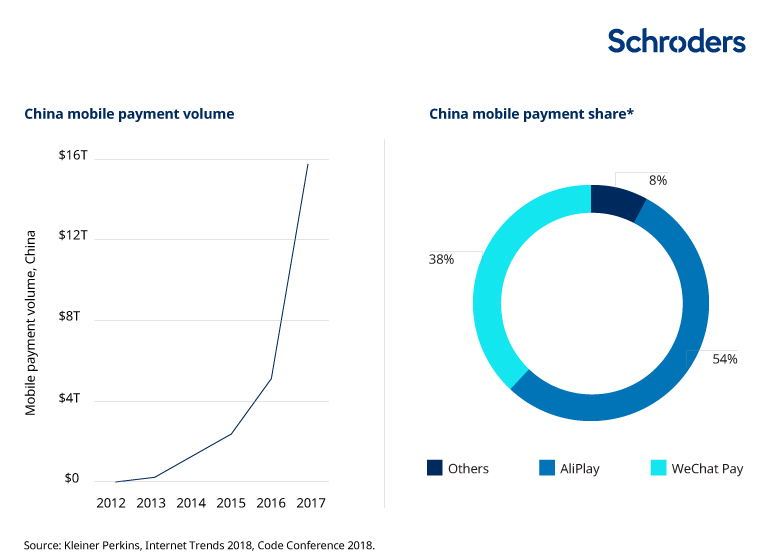 The introduction of competition coincided with the rise and adoption of the internet. This meant that companies like Alibaba acted as an online mall for retailers, as well as providing mobile payment facilities. Consumers trusted these emerging companies more than previously run state retailers and banks, hence take-up of m-commerce being more rapid in China than in the West.

This means that Chinese consumers are used to purchasing and paying online. New software allowing them to control other areas of their lives will, we think, be adopted equally quickly.

Once launched, 5G will serve as a foundational technology enabling many new applications to emerge, which are not possible over the existing network. These are likely to include driverless cars, smart city infrastructure and connected factory floors. Collectively, these networks form the Internet of Things mentioned above and they are expected to generate vast amounts of data3.

We witnessed the momentum behind 5G-enabled technologies at the 2018 Mobile World Congress in Shanghai, where the theme was very much “5G now”. Networks in China are racing to beat US carriers such as Verizon to launch 5G services this year.

Beijing, Shanghai, Tianjin and Shenzhen all make it into the Top 30 of our Global Cities Index, which identifies the world’s most economically vibrant cities.

They are elevated by a unique density of consumers, digital infrastructure and tech-talent from institutions such as Tsinghua University. Coupled with a long-term government vision to lead the world in mobile technology4, we believe these cities are the perfect incubators for new technologies such as 5G.

Existing network infrastructure for 5G is more advanced in China than in other markets. This is why the opportunity in Chinese cities and specifically in the areas of data centres and small cell companies is apparent.

One hurdle for 5G adoption is that a city like New York is likely to require 40,000-50,000 cell sites to deliver the service (source: ExteNet). China already has around 2 million macro tower sites, meaning that viral animal clips on Douyin load instantly on demand. This is more than 10x the number of sites owned by the US tower infrastructure leader ‘American Tower’.

To continue funding the denser urban small cells needed for 5G, the three state-owned Chinese telcos are looking to raise capital through an IPO of their jointly-owned network infrastructure, which supplies 97% of the market5. This week saw the $7 billion listing of ‘China Tower’ in Hong Kong, with researchers at consultant Frost & Sullivan expecting wireless data on the network to grow at 39% pa until 2022 (source, China Tower filing).

M-commerce is one area of data creation growth that continues to fuel demand for data centres and tower networks. M-commerce has thrived on the back of 4G and applications created by companies such as Alibaba.

More broadly, we do not see a slowdown in Chinese electronic commerce (e-commerce) coming, far from it. We see a long runway of growth representing an enormous number of people yet to adopt e-commerce.

The chart below shows the very rapid and sizeable adoption of the Chinese consumer buying goods electronically. However, this only tells a part of the story. The absolute size of the Chinese population means that the unpenetrated market (80%) has greater depth in numbers than any other market in the world. 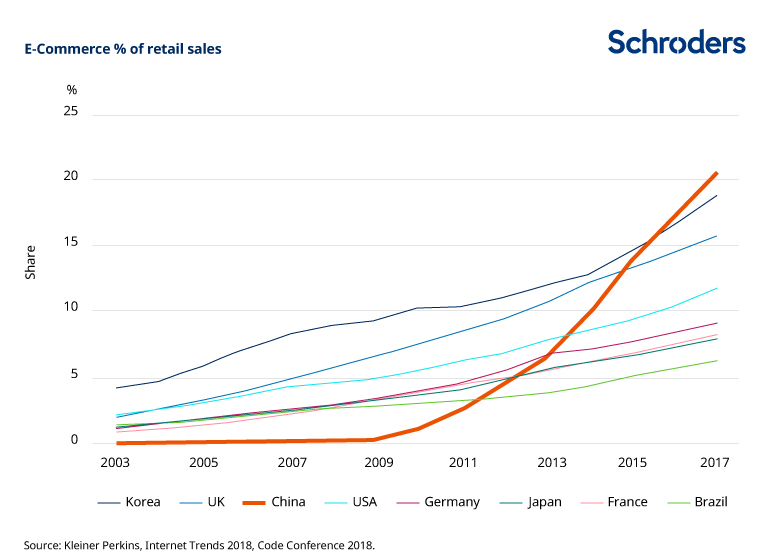 We think that m-commerce can still grow rapidly, but creation and adoption of other software and technology represents a new level of growth in data creation and processing. This is why the opportunity that 5G represents is so compelling.

5G represents a critical growth point. Companies that own network infrastructure and data centres will benefit from widespread mobile usage of the Chinese consumers and future adoption of the Internet of Things.

This communication infrastructure has to be located in cities, near to large populations. In particular, the meta cities we have written about that will grow quickly because of government transport projects. These locations will provide outsize economic growth and provide investors with the strongest returns.

We think that there is an inflection point coming in how people control their lives through their devices. We think 5G is the catalyst and 5G can only operate over short distances in dense locations, so it needs Global Cities. We think this makes Global Cities even more important to the world economy, underpinning the value of land in specific locations.

This exciting evolution will increase the gulf between winning cities and the rest. For investors in companies that will benefit from or facilitate 5G, located in Global Cities, the future could be very bright.

Our global cities team launched the Global Cities blog in 2016, which acts as a resource to track the longer-term trends impacting global real estate. The index uses a number of factors to identify the most economically vibrant cities across the world. You can find out more here.