Passive credit investors could be facing significant downgrade losses when the next economic downturn hits. Active managers, however, have the flexibility to manage these risks more efficiently, argues Sean Markowicz, Strategist, Research and Analytics, at Schroders.

Investors have become increasingly worried about the steady increase in the number of lower rated US corporates. The share of BBB-rated bonds, the lowest tier of investment grade (IG) debt, as a proportion of the overall US market has risen to an all-time high of 50% in 2019. In contrast, it stood at only 33% in 2008.

Although, on average, default rates on BBB-rated bonds are very low (0.2% a year1), a more pressing risk for investors is downgrade risk (a deterioration in an issuer’s credit rating). Whenever the next economic downturn arrives, as it inevitably will at some point, corporate fundamentals will weaken. Falling earnings will put pressure on the cushion available to cover interest payments and some measures of leverage will rise.  All else being equal, credit spreads on affected bonds rise and prices fall. Historically, this has also resulted in rating agencies downgrading many borrowers’ credit ratings.

BBB-rated bonds are exposed to a particularly acute form of this risk. Because they are on the cusp of IG status, a downgrade would see them relegated to the high yield (HY) market (these are known as fallen angels). This is a problem as, for a variety of reasons, including regulation, many investors are only permitted to hold IG bonds and so would be forced to sell the downgraded bonds.

Additionally, all passive investors would be forced to sell these bonds because they would exit all IG market indices at the next rebalancing date (usually the following month)2. This market segmentation results in a cliff edge in pricing, hanging on whether a bond maintains or loses its IG status. Unfortunately for these investors, the point of downgrade has historically been the worst possible time to sell these bonds.

Given the current large size of the BBB segment, this risk is especially elevated. Fallen angel volumes could be higher than in previous credit cycles and this could weaken portfolio returns. Passive strategies are particularly exposed to this risk, not least because of the sheer increase in passive bond products. Around 28% of all US bond assets under management are now owned by passive index funds, up from 9% in 20083.

Although the exact timing and volume of downgrades from the IG market is hard to predict, we can estimate their potential impact on IG index returns using historical experience. For example, based on the Moody’s 1920-2018 credit migration matrix, 3.2% of the IG market has been on average downgraded to HY each year. If this happened today, $211 billion of bonds would be affected. However, downgrades are typically well above average during economic downturns and this figure could rise to between $275 billion and $557 billion, if the last three downturns are used as a guide. At the overall index level, this could result in a mark-to-market loss of up to 3.5%, or roughly $230 billion in monetary terms. 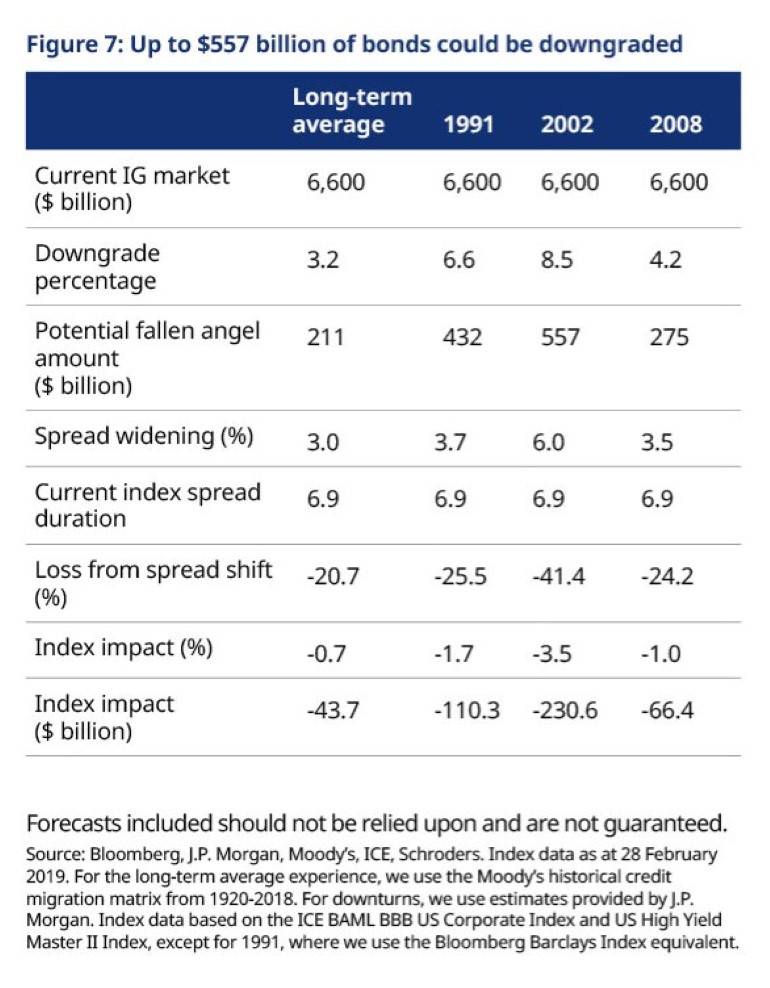 Being flexible can mitigate against downgrade losses

Whichever scenario occurs, the market is likely to move before the rating agencies act.

Historically, spreads of fallen angels have widened by around 300 basis points, or 3%, ahead of a downgrade to HY. Although they have continued to rise by around another 50 basis points, on average, in the immediate aftermath, most of the pain has already been felt.

In addition, prices tend to partially recover in the months that follow. Selling at the point of downgrade would have been suboptimal, locking in close to the maximum potential loss. Either the ability to sell before a downgrade or hold onto a fallen angel and sell later on, would have generated a better outcome. Neither option is fully open to passive investors. In contrast, active managers have the flexibility to manage fallen angel risk more efficiently because they are not forced sellers and can also discriminate between healthy issuers and those that are more vulnerable. 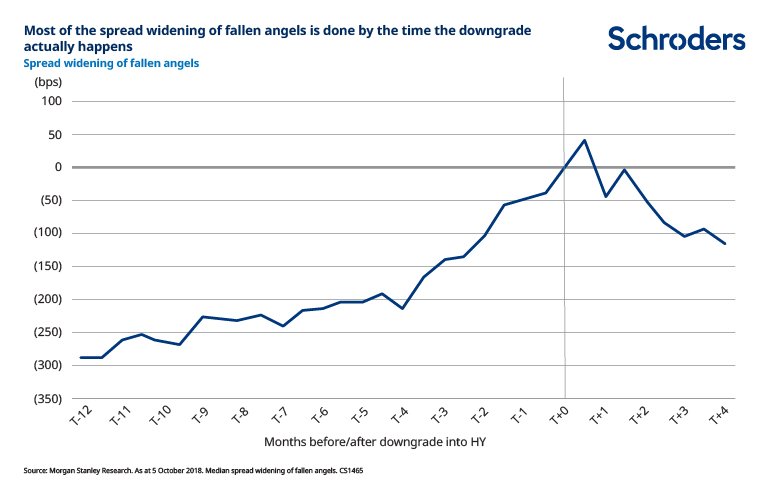 1) Moody’s Annual Default Study: Corporate Default and Recovery Rates, 1920-2018
2) Most passive investors trade throughout the month as opposed to rebalancing on a single day at month end. This means that they can technically sell bonds before/after a downgrade. However, doing so would increase the tracking error of the index fund so there is an inherent trade-off between tracking the performance of an index and avoiding bonds that may harm the fund’s performance. Seeing as the objective of a passive fund is to track an index, passive investors have very limited, if any, flexibility to manage fallen angel risk.
3) Morningstar Direct Fund Flows Commentary 2018 Global Report