What is “energy transition” and why does it matter to investors?

OpinionsWhat is “energy transition” and why does it matter to investors?

The switch to renewable energy is gathering pace and is likely to prove hugely disruptive, explains Mark Lacey, Head of Commodities at Schroders.

Renewable energy is well on its way to becoming a core part of our energy mix. In May this year, the UK went a full week without using coal to generate power for the first time since 1882. Clean energy sources are increasingly being used as cost effective and low emission alternatives to coal, oil and gas.

But renewable energy makes up just a small part of the global energy mix at present. This needs to rise substantially if we are to meet climate targets, including the Paris agreement designed to limit temperature rises to 2°C. We therefore need a rapid switch to renewable sources of energy.

There have been two previous transitions to new sources of energy: from traditional biofuels (such as wood) to coal in the late 19th century, and from coal to oil and gas in the mid 20th century. The chart below shows how the global energy mix has changed since 1800. 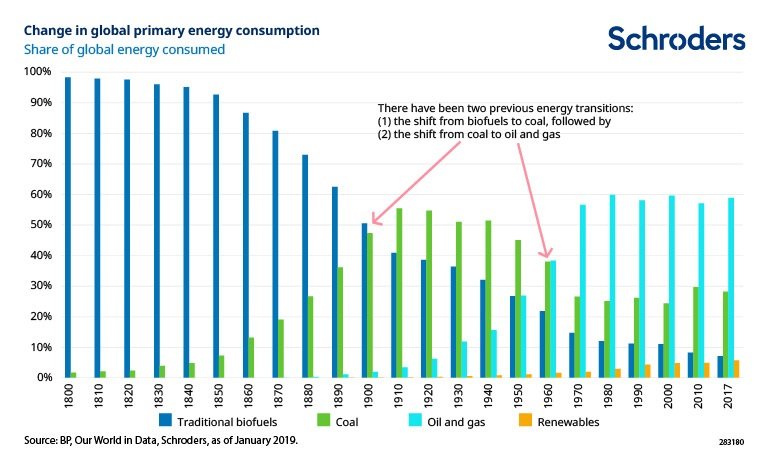 As the chart shows, renewables are currently just a small part of the picture. But we think they could reach a 30-40% share of the total mix in the next 30 years.

Both of the two previous energy transitions were long-term structural changes that proved hugely disruptive. Use of coal was spurred by the introduction of the steam engine. The transition to oil & gas was driven by the move to the internal combustion engine. These technologies then powered enormous changes in society.

But switching to energy generated by renewables and away from fossil fuels is only one part of the energy transition. Just as crucial is the development of the infrastructure needed to enable the switch. For example, wind and solar farms can generate a huge amount of power when it’s windy or sunny, but this will need to be stored until it’s needed by consumers.

Similarly, there will need to be huge investment in the transmission and distribution networks to support increased demand for electricity rather than other forms of energy. In addition, a significant amount of investment is needed to make the entire system more efficient and this involves a large amount of technology-driven investment. An important part of this demand is the growing popularity of electric vehicles and therefore new, large-scale charging infrastructure for these will be needed.

To sum up, when we talk about energy transition, generating power from renewables is only part of the picture. The mass introduction of electric transport infrastructure, energy storage, improved transmission and distribution networks, coupled with the increased usage of technologies to improve energy efficiency, are all part of the transition too. We expect this to prove hugely disruptive to the energy industry over the next few decades.