Why we expect a capex surge in Europe

OpinionsWhy we expect a capex surge in Europe

These figures refer to capex by listed companies, so they exclude planned spending by unlisted firms and the state. However, combined with our top-down analysis of the drivers of capex, we are confident that they are directionally correct.

What do we mean by capex?

Capex refers to spending on investments or new projects, for example acquiring or upgrading assets such as equipment or property. The point of such spending is to increase a company’s production capacity. Capex therefore tends to pick up at times when companies are confident there will be growing demand for their products, and so reflects their confidence in the strength of the economy.

Why has capex been weak in recent years?

Capex stagnated in the wake of the global financial crisis (GFC), with companies reluctant to invest at a time when economies worldwide were suffering recession. More recently, the end of the commodity boom was another significant factor causing capex to decline, since oil & gas and mining companies have historically made up a significant proportion of total corporate spending.

Europe in particular has seen a slow recovery from the GFC, with economic expansion only really taking hold in the last 12 months.

The chart below shows our capex model and indicates that the past few years have seen a multi-year downturn in capex – the most protracted for several decades. The 2014-16 peak-to-trough contraction in capex across all the companies in the model was 15.8%, or $450 billion. 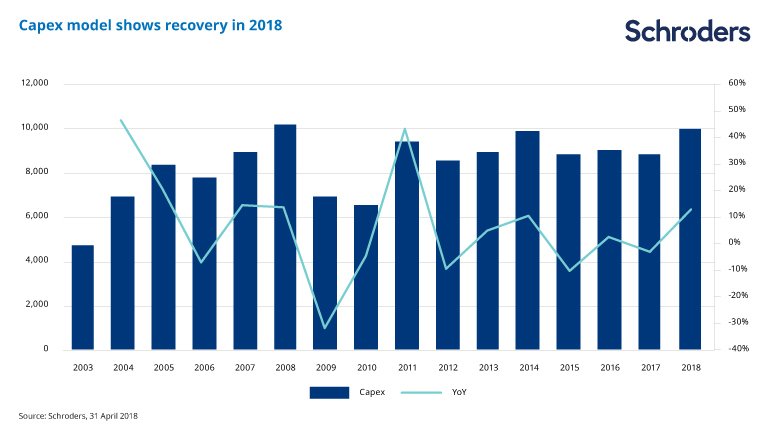 Our model aggregates consensus capex forecasts for thousands of companies across various different end-markets. The 2018 forecasts, showing an expected 8.3% capex increase, incorporate the guidance released by companies at the full year results. With capital budgets typically set months in advance, these should be reasonably accurate.

An important part of why capex is expected to pick up this year is that many industries are already close to full capacity. The chart below shows the capacity utilisation rate in Europe. This fell dramatically in the wake of the GFC and then remained at relatively low levels during the eurozone sovereign debt crisis. However, the rate is now close to its all-time high.

This indicates that factories in the eurozone are almost as close to capacity as they have ever been. Companies will therefore need to increase capacity and/or efficiency if they want to increase the amount they produce.

There are other factors at play too which could see capex increase in the coming years:

The above are largely factors that we would expect to play out over a period of several years. The pent-up demand from a decade of underinvestment cannot be caught up in an instant. In our view, there is no reason why capex cannot continue to grow in 2019 and 2020, so long as GDP growth remains robust.

We see a capex pick-up as being the next leg in the slow European economic recovery. Greater capital spending by corporates is a sign they are confident that the recovery will be long-lasting. Capex should also help to sustain the recovery, given the prospect that QE could be withdrawn in the fairly near future.

What does this mean for stockpickers?

As active fund managers, it is not enough for us simply to identify general economic or sector trends; we must translate that into selecting specific stocks for our portfolio. We can count on an experienced team of European equity analysts to support this process.

We look for industries where the current investment levels look to be low versus “normalised levels” or where there is a structural reason for capex to increase.

Companies increasing their capex may in the short-term see returns to shareholders drop or plateau, as capex takes priority over dividends. On the other hand, the companies who build the new plants, re-tool the factories, and produce the new equipment or robotics should be the short-term beneficiaries as spending picks up. Our task is to discover the most attractive mispriced opportunities in order to deliver the best returns we can.

Any references to securities, sectors, regions and/or countries are for illustrative purposes only and should not be construed as advice or a recommendation to buy or sell.