Have bonds lost their bite?

Traditionally, investors have relied on bonds to give them shelter when equity markets dip. But anyone switching from shares into bonds in February’s brief market turmoil would have gained only limited protection. Most types of bond followed equities down during those turbulent days. So have bonds lost their ability to protect portfolios against market squalls? We think not, but investors relying on bonds as an anchor in stormy markets need to be aware of changes in the conditions affecting their behaviour.

Our first chart shows the after-effects of February’s squall. (Bond prices fall as yields rise so we’ve turned our charts upside down to help readers see the direction of capital values as yields change.) The group of bars on the left show that, although short-dated bonds – those due to repay relatively quickly – provided some sanctuary in February, anything with repayment dates beyond two years lost money. And things have got worse since then. The other two groups of bars show that even the shorter end of the bond market has given up its gains, while longer-dated bonds have fallen further.

In technical terms, the yield “curve”, the difference in yield between short, medium and long bonds, has “flattened” – yields over all time periods have tended to equalise. The question for investors is whether all this is just a blip or whether bonds, particularly those in the short and medium part of the spectrum, have lost their effectiveness as a shield in difficult markets? 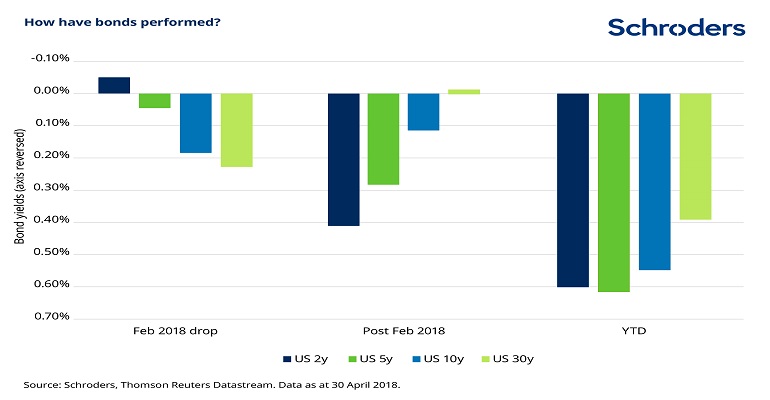 History can provide some help here. Despite the unsettling experience of February, it is worth remembering that bonds have been an excellent hedge against most of the major equity sell-offs over the past three decades or so, as our chart below shows. 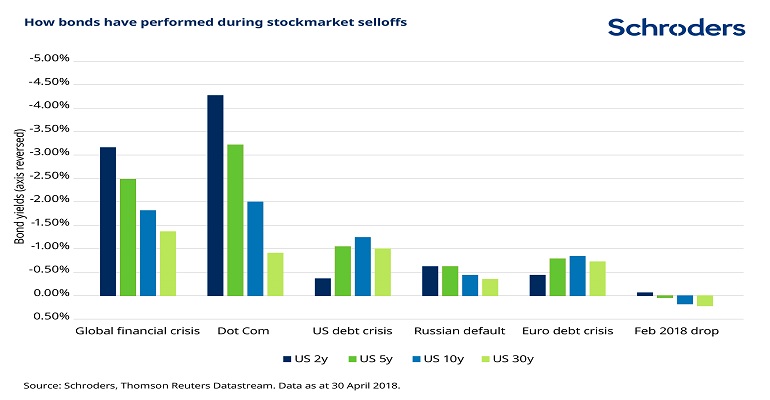 Of course, the last 30 years may not be the best pointer to the future. In the next chart, we have looked back over more than half a century to 1964 to see the shift in the US 10-year yield during weeks when the S&P 500 equity index fell by more than 3%. From this we can calculate that US Treasury bonds, seen by many as one of the safest investments an investor can make, helped to protect against large weekly moves in equities more than 70% of the time.

However, it is also clear that Treasuries were much more reliable protectors in the more recent part of that period. If we cast our eye back to before the 1990s, we can see that longer maturity bonds were often not such a good hedge, only protecting against equity sell-offs 40% of the time. The February sell-off, when the yield on US 10-year Treasury bonds rose by 0.13%, therefore looks more typical of the earlier period. Does this mean then that bond investors should brace themselves for a return to conditions more like the pre-1990s period? To answer this question it may be helpful to remember the very different economic conditions prevailing before 1990. The 1960s and even more the 1970s were marked by rapidly rising inflation, brought on by soaring oil prices. This runaway inflation was only reined in during the 1980s with rising interest rates and tight control of the money supply. From then on rates fell steadily, spurring the long bull market for bonds which is only now coming to an end as rates start to rise again. Could it be, therefore, that the bond market’s February upheaval is a symptom of a shift in economic conditions which could take the relationship between equities and bonds back 50 years? We looked at some current economic variables to see if they could provide pointers.

The prospects for inflation are a key influence on both equities and bonds through their effect on interest rates. Central banks often use higher rates to combat the causes of inflation, like rising wages or currency weakness leading to higher prices for imports. Until recently inflation (as measured by, for example, the US Consumer Price Index) has been stable at around the 2% level. Lately, however, inflation has been on the rise again and there are fears that pressures are building that will push it higher still. Forces like the retreat of globalisation, political populism and instability in the Middle East are undermining the certainty that once prevailed. Against this cloudier backdrop, bonds seemed like less of a safe haven to investors in February – indeed inflation fears were said to be one of the triggers for the sell-off.

Financial history is littered with shocks that have had a profound effect on asset prices. The source of major shocks is often either inflation taking off unexpectedly (as in the 1970s) or growth taking a surprise turn down (as in the financial crisis of 2007-2009). Inflation shocks are bad for both equities and bonds, as we have discussed, whereas growth shocks usually hit equities and boost bonds as investors seek less risky assets. The relative stability of inflation has meant that, in general, shocks have been driven more by uncertainty about growth than inflation. The recent sharp increase in trade tensions between the US and China has increased concerns over the impact on global growth, reflected in wobbles in equity markets. However, as we have discussed, inflation fears have also picked up, which is bad news for bonds, at least in the short term. The fallout from current economic shocks could therefore fall on both asset classes, undermining the safe haven status of bonds.

Central banks’ mass purchasing of bonds through quantitative easing (QE) programmes has artificially depressed bond yields and therefore kept prices high, while also supporting equity prices at levels above where they might otherwise have been. The side effects have included an increased tendency for equity and bond prices to move in opposite directions.

However, in the last few years, quantitative easing has gradually been turning into “quantitative tightening” as central banks slow, stop or even reverse their bond buying programmes. At the same time, interest rates are starting to rise again for the first time since the crisis of 2007-2009. This gradual return to something like “normal” monetary policy is turning what were two tailwinds for bonds into headwinds. This change in climate may also spur a change in the relationship between bonds and equities.

When seeking a safe haven from market turbulence, US Treasury bonds are often a first port of call, particularly for foreign investors, notably the Chinese. Foreign purchases of Treasuries have indeed risen significantly over time. This increased demand may have had the same effect as QE in exacerbating the negative correlation between equity prices and bond prices. While it is unclear whether foreign holdings will fall significantly in the future, investors need to be aware that this may also have an effect on bond prices.

What next for bonds?

It is unlikely that we will see another 30-year bond rally like the one we enjoyed after 1990. The economic weather has definitely turned chillier. With higher inflation and tighter monetary policy on the horizon, it would not be a surprise to see the relationship between bonds and equities undergoing a change.

With that said, we don’t believe any of these conditions will be fast-moving and, while there are parallels with the pre-1990s period, they are not exact. Most importantly, many of the forces that have suppressed inflation over nearly a generation remain influential. These include the increasing importance of technology in business and commerce, the prevalence of global supply chains and the weak bargaining power of labour. Clearly, some of these forces are under attack, most notably global trade, and the outcome is hard to predict, but we do not expect to see the world reverting to the conditions of the 1960s and 1970s. Moreover, while the price of oil has risen in recent years, there has been nothing like the quadrupling seen in 1973. The future has a tendency to upend forecasts, but at this stage we cannot see any kind of economic shock ahead on the scale of those experienced in the 1970s.

We suspect, therefore, that while the defensive qualities of bonds may start to be chipped away, this process may take some time. Bonds should still provide stability for investors caught up in market upheavals. They may be less reliable than they were, but bonds are likely to retain much of their bite in times of need. That said, those of shorter maturity may start playing a bigger role than those at the longer-end of the maturity spectrum. These longer bonds are more likely to be hit by any worries about growth and inflation, particularly given that lower yields in longer bonds may not price in all the risks.

What this means for investors is that they must continuously evaluate each asset’s role in a portfolio and not take any for granted. And, more than ever, diversification is likely to be a particularly close friend in these uncertain times.