Is China’s currency weakness the latest salvo in trade tensions?

Craig Botham, Emerging Markets Economist at Schroders, questions whether China’s currency is being used as a weapon in trade tensions.

China’s currency, the yuan (CNY), has weakened 4-5% relative to the US dollar since June. This has prompted a lot of speculation that the authorities are deliberately weakening the currency in response to tariffs, and that this could mark the beginning of a series of devaluations for China. These fears are vastly overblown.

Official policy targets a basket of currencies, not a peg versus the US dollar

The first error made in this analysis is the assumption that China targets a peg versus the dollar. It does not. Official policy is to target a basket of currencies (essentially trade weighted) known as the CFETS basket. On this measure, the Chinese currency is only 2.5% weaker since June.

Not only that, but as is visible from the chart below, this weakness is only reversing the strength seen this year. Since the CFETS basket was established in 2015, it has spent most of its time around the 94 mark. The deviation from currency policy has not happened in the last month and a half, it was the January – June period. 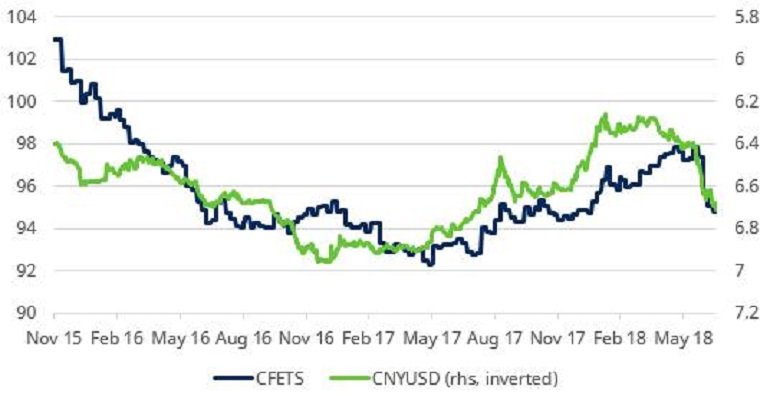 So in a way, the press and other breathless analysts are right – trade tensions have been dictating Chinese FX policy. Just not in the way that garners headlines. Recent weakness is a reversion to the norm after a period in which the authorities deliberately allowed currency strength, presumably to avoid antagonising the US further at a delicate moment in negotiations.

We would not rule out the use of the currency as a weapon in the trade wars to come, but it remains under tarpaulin in the armoury for now. Should the CFETS pass through the 92 level, there will be more of a case to be made that China is aiming for currency weakness to counter US tariffs.