Why a pick-up in UK growth may prove deceptive

OpinionsWhy a pick-up in UK growth may prove deceptive

Recent economic data from the UK has improved but signs are that this is due to stockpiling ahead of worries over potential Brexit disruption, argues Azad Zangana, Senior European Economist and Strategist at Schroders.

Brexit continues to dominate news and politics in the UK. Even lowly economists pray for a break from the mundane gridlock and circular arguments. Now that the Brexit deadline has been extended to October (see Is the UK stuck in Brexit limbo), a little breathing room has been created to allow other topics to enter the fray.

The medium to long-term outlook for the economy will be heavily influenced by Brexit. The Bank of England had downgraded its growth forecast for the coming quarters, citing a more negative impact from Brexit uncertainty than it had previously anticipated.

However, recent data has been better than expected. The monthly GDP release for January showed a significant improvement, as GDP growth picked up to 0.5% compared to -0.3% in December.

UK growth seems to be improving 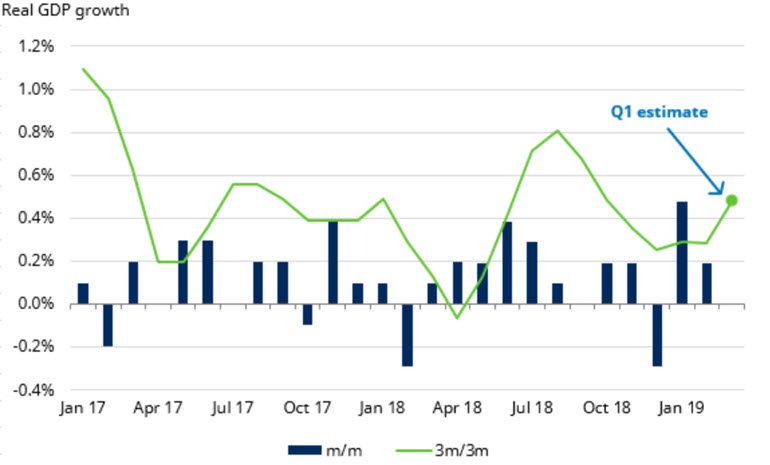 The release for February was more subdued, with 0.2% growth, but even if the economy stalls in March, the quarterly GDP estimate for the first quarter of 2019 would be 0.5%. We suspect it could be even higher. In any case, it will probably prompt many economists to revise up their estimates for 2019. The data is due on Friday 10 May.

An analysis of the contributions to GDP shows that a resurgence in manufacturing has played an important role in the pick-up in activity. This is reflected by recent readings from the Markit purchasing managers’ indices (PMI) – a set of private sector surveys that gauge the level of activity in the economy. A balance above 50 implies expansion; below 50 implies contraction. The March UK manufacturing PMI showed activity at 55.1, its highest level since February 2018. This has since slipped to 53.1 in April but it remains substantially above the services level (50.4 in April). 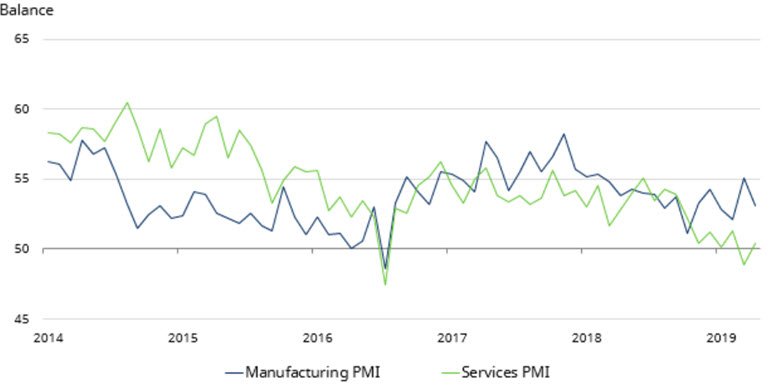 The weakness in services is a concern for the coming months given how much larger the service sector is in terms of its share of the economy.

Delving into the details of the manufacturing PMI survey, we discover a worrying development. The questions that ask about the degree to which companies are building inventories show stocks of both finished goods and of purchases (parts or raw materials) are both are record highs. 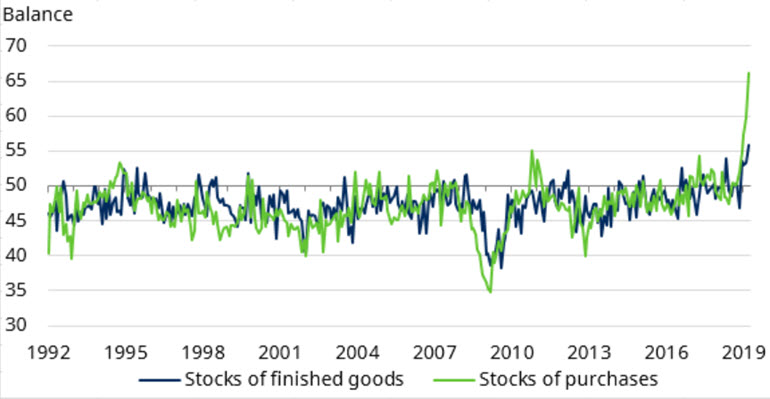 The unusual boost from Brexit

In the run-up to the original 31 March Brexit deadline, there were a number of anecdotal stories of both companies and government entities stockpiling supplies, for example, of medicines by hospitals and pharmacies.

While the manufacturing PMI survey only covers private manufacturers, we suspect it is a good indication of widespread stockpiling. Stockpiling inevitably leads to a slowdown in production at a later point in time. Typically, a large build-up of inventories is involuntary. Companies are usually producing output at a normal pace, when a fall in demand and sales leads to unsold stocks building up.

This time is different as companies are hoarding ahead of possible disruption to output and the ability to import. Regardless of the cause, a slowdown in growth is likely, whether that disruption hits or not.

Once stockpiling ends, GDP growth is likely to slow

For manufacturing activity to continue to enjoy above normal production, further stockpiling would need to occur. Reports of shortages of warehouse space suggest that this is unlikely to continue for much longer. Production levels would have to be wound down to stop any further build-up of inventories.

If demand then disappoints, or if imports are not as restricted as feared in a worst-case scenario, then excess inventories would have to be discounted or destroyed at a cost to producers and retailers.

The Bank of England has stated its ambition to raise interest rates back to more “normal” levels, but we think it is unlikely to follow through given the poor quality of growth the UK is experiencing, set against a backdrop of ongoing Brexit uncertainty.

The government should also take note. Celebrating the forthcoming pick-up in GDP growth for the first quarter could prove to be premature. Indeed, Chancellor Philip Hammond has indicated that he may need to delay the next comprehensive spending review due to the delay in Brexit. Committing to a multi-year spending programme (which is likely to be stimulative) at a time of great uncertainty would be a big gamble.