Are investors too pessimistic on European shares?

Some European markets seem priced for recession but economists still forecast growth for the region in 2019, explains Emma Stevenson, Investment Writer at Schroders.

European equities had a tough 2018 with the benchmark MSCI Europe index falling 10.6% over the year. Trade wars, reduced support from central banks and slower economic growth were among the factors that saw higher risk assets such as equities fall out of favour.

Despite the difficult global backdrop, the eurozone economy continued to expand in 2018, albeit with quarterly growth slipping to just 0.2% in each of the final two quarters of the year.

However, some European equity valuations have fallen to levels that imply we are already in a recession. The chart below compares the current price-to-earnings (P/E) ratio of the pan-European index, and individual country indices, to their P/E ratios in the last two recessions: the global financial crisis and the sovereign debt crisis.

P/E ratios are a common valuation measure and are calculated by dividing a stock market’s value or price by the earnings per share of all the companies within it. A low number represents better value. 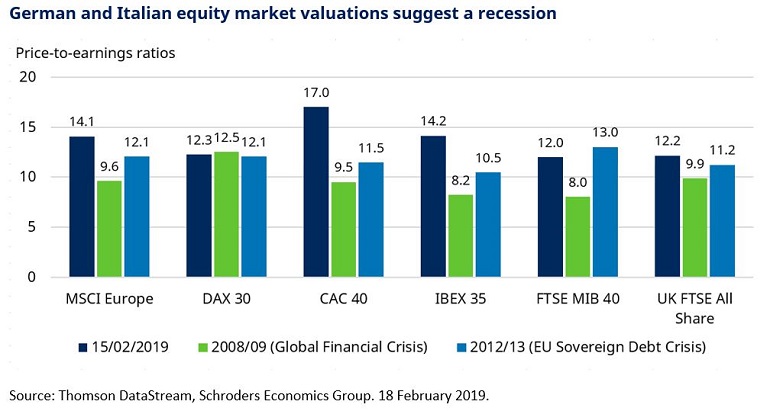 For most countries, and the pan-Europe benchmark, valuations now are above the levels of the two very deep recent recessions, as you would expect. One exception is Italy, where political uncertainty and ever-present worries over the health of the banking sector mean valuations for the FTSE MIB are below the levels reached during the sovereign debt crisis. The other is Germany, where current valuations for the DAX are below those reached in the 2008/09 global financial crisis.

“The first, the global financial crisis, is probably a once in a century event. The second, the EU sovereign debt crisis, is certainly possible again, although steps have been taken by regulators and the European Central Bank to mitigate a repeat. If Europe is currently in recession, then it is likely to be a shallower and shorter recession than the previous two. Despite this, the P/E of the German DAX is currently at just 12.3, below that of the global financial crisis. This suggests that an extreme negative scenario is priced in to German equities.”

Why would this be? Germany’s export-oriented economy makes it susceptible to worries over trade wars. While the trade war headlines have focused on the US and China, President Trump has threatened tariffs on European goods too. In addition, global supply chains are so intertwined that disruption would be felt far beyond the two main antagonists. Trade wars could impact demand from China, and likewise Brexit could disrupt the UK, another of Germany’s important export markets.

German growth was disappointing in the second half of 2018, with a contraction of -0.2% quarter on quarter in Q3 followed by flat growth in Q4. Azad Zangana says this was mainly due to temporary factors, including “supply disruptions in the autos industry due to the introduction of new car emissions tests, but also low water levels in the river Rhine stopped the shipping of raw materials to factories. We estimate that that the disruption in the autos industry is worth 0.5 percentage points (pp) alone on quarterly growth.”

We can conclude that there are plenty of risks, but does this justify the extremely low valuation levels? Azad Zangana argues not: “We are not forecasting a recession for either Germany or the eurozone in 2019, which prompts us to be more positive on European risk assets than the market.”

“We do not invest on a country basis but, rather, look for stock-specific mispriced opportunities. What is clear is that some parts of the European stock market fell to what we believe to be oversold levels at the end of 2018.

“Some economically-sensitive sectors are trading at very low P/E levels, whereas many defensive shares are at record highs. The share prices of many companies in sectors such as autos and auto parts, or packaging, now appear to be pricing in an extremely pessimistic scenario. As such, these are the areas that we think could potentially perform best if sentiment were to improve.”

As an example, the automobiles & components sector is currently trading on a price-to-earnings ratio of 6.7x. This compares to 22.2x for the beverages sector, which is often perceived as a defensive safe haven for investors when economic times are tough (data source: Thomson Reuters DataStream, as at 14 February 2019).

Skanberg adds that broader economic growth is not the only driver of share prices: “Another driver can be restructuring, whereby companies take self-help measures to deliver growth and/or a share price uplift irrespective of the general market environment. Restructuring stories such as cost cutting, improved returns to shareholders and business simplification can be powerful tools to create shareholder value.”

As ever, even when shares appear very cheap, it’s impossible to say with certainty that the market will start to value them more highly. Immediate attention will now be on Brexit and the trade wars. These and other issues could continue to prove disruptive for equity markets but such disruption may already be factored into prices.