We have cut our global GDP growth forecast again for 2019 but have revised up our prediction for 2020 amid greater optimism on the longer-term outlook, explains the Schroders Economics Team.

We have revised down our forecast for global GDP growth in 2019 to 2.8% from 2.9%, but increased our projection for 2020 to 2.7% (from 2.5%). The downgrade for this year (the fourth in consecutive quarters) is driven by cuts to our forecasts for the eurozone, UK and Japan which offset a small increase to our China forecast.

Meanwhile, our inflation forecasts have been reduced for this year and next with reductions across all regions except Europe. US inflation is also lower as a result of a smaller rise in core inflation (i.e. excluding food & energy prices) which we expect to peak at a lower level before declining in 2020.

Underpinning these forecasts are a number of factors which give us reasons to be more cheerful about the longer-term outlook:

We now expect the Fed to increase interest rates only once more before they start to fall in 2020 as the boost from tax cuts disappears and monetary tightening feeds through. It seems unlikely that additional fiscal stimulus will be passed by the Democrat-controlled House.

While a trade truce between the US and China could help boost external demand later this year, even as the trade war quietens down the tech war will remain in full swing. We would expect the US to continue to challenge China in this area either through sanctions on Chinese companies or preventing its own companies from exporting key technology items.

We have pushed out rate increases in the UK and eurozone. In the case of the UK, this reflects the growing likelihood that a short delay may be required to facilitate Brexit. Conversely, in Europe, temporary factors have held back growth but we expect the effects to begin dissipating in a few more months.

Among these temporary factors, Germany was impacted by changes to car emissions testing which caused sales of new vehicles to slump sharply from September 2018. Sales have begun recovering. Germany’s woes were compounded by a drought that reduced the river Rhine’s water levels so significantly that it led to disruption in raw materials shipments.

In the meantime, in Italy political uncertainty caused financing costs to rise across the economy. In the end, the government’s expected spending splurge was far more modest than feared and the 2019 budget was approved, albeit after a very public battle with the European Commission.

Given the temporary nature of these shocks, we expect to see an improvement in growth by the summer. Fundamentals are sound in Europe with monetary policy still very loose while most countries have completed their austerity programmes. Following the 8 March European Central Bank meeting, we now forecast a rate rise in March 2020.

VAT increase in focus in Japan

In Asia, we expect the Bank of Japan to leave monetary policy unchanged. Energy and one-off factors should drive a further moderation in inflation before a VAT-led spike in October, as the VAT rate rises to 10% from 8%. We expect a subsequent sharp decline in demand and dissipating inflationary stimulus. On the other hand, more infrastructure spending for disaster prevention should support growth at the end of 2019, and more substantially in 2020.

China is expected to ease further through a lower reserve requirement ratio which is now forecast at 10% by end 2020 (previously 11%). The ratio dictates the amount of cash banks have to hold in reserve, so a lower ratio frees up more capacity for lending.

The main changes for emerging markets come from inflation. Crude oil prices have fallen dramatically since we last updated our numbers. Combined with surprisingly low domestic inflation this sees substantial downward revisions to the inflation outlook for all BRIC economies bar Russia, for whom cheaper oil means a weaker currency and hence more imported inflation.

Turning to currencies, the US dollar is expected to remain firm in the near term, but to weaken later in the year as rates peak in the US whilst monetary policy tightens in the eurozone and UK. Sterling is also boosted by our assumption that a Brexit deal is struck and the UK enters a transition period after 29 March, rather than crashing out of the EU.

These forecasts represent our baseline case, to which we attach a 60% probability. We also model a number of alternative scenarios. One of these is “Recession excluding US”, whereby the outlook in China and Europe deteriorates significantly, while another is “US recession 2020”. These two scenarios would both have a deflationary impact on the world economy and we estimate the probability of these at 17%.

We also model three scenarios that would have a stagflationary impact, i.e. causing persistent inflation and stagnant growth. These are “Trade war: US versus Rest of the World”, “Global inflation surge” and “Italian debt crisis”. We attach a 14% probability to these three scenarios.

We see a lower probability for two reflationary scenarios. In the first of these, “China reopens the spigots”, we assume large scale stimulus from Chinese policymakers. In the second, we model a “US supply side surprise” whereby more people enter the US workforce, therefore containing wages and inflation and extending the economic cycle. 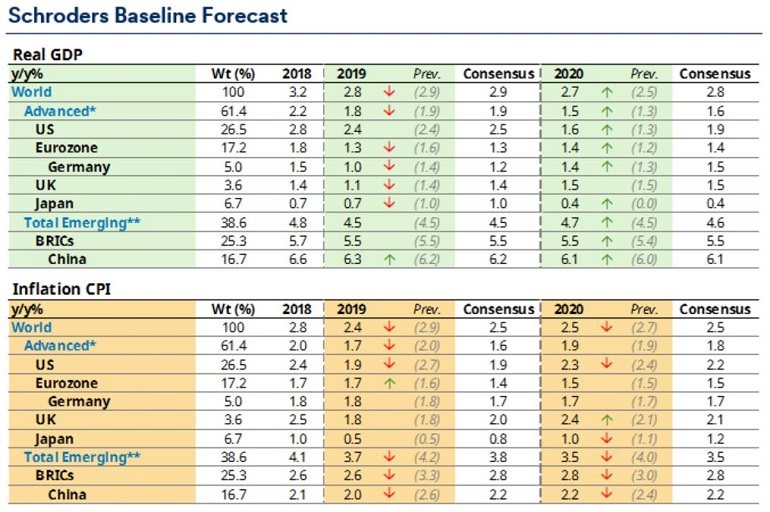